Studies find the amount of food currently wasted in Europe could feed 200 million people, and when we look at the bigger picture, the number is potentially even higher. Indeed, it does not come as a surprise that food waste is increasingly getting the lion's share of environmental concerns in the developed world. From plastic pollution to greenhouse gas emissions, food waste is linked intimately with climate change. But why is that so?

A recent poll by The Guardian found that climate change is viewed as the most important issue facing the planet, ahead of migration, terrorism and, the global economy. Unsurprisingly, a great deal of waste is due to the food and beverage industry. According to the British charity “Waste and Resources Action Programme” (WRAP), the ready meals and chilled products' sector accounts for 12% of total waste in the food and beverage industry supply chain. Money-wise, this equates to roughly £1.4 billion wasted each year by UK manufacturers alone.

To tackle this problem, WRAP launched the 'Food Waste Reduction Roadmap', a ground-breaking, industry-wide roadmap and toolkit to help food businesses take targeted action to reduce waste in their own operations, their supply chain and from ultimately consumers.

The UK is not alone in this fight, as similar initiatives are being started anywhere in the world. Food waste is very much a global problem: about one-third of food produced gets wasted. We are talking about 1.3 billion tons of food, approximately corresponding to 4.4 gigatons of greenhouse gas (GHG) emissions per year. To put this in perspective, if food loss and waste were its own country, it would be the world's third-largest GHG emitter, surpassed only by China and the United States! On this basis, in September 2015, the United Nations adopted the UN Sustainable Development Goals (SDG), among them the UN Sustainable Development Goal 12.3, that aims to halve by 2030 per capita global food waste at the retail and consumer levels and reduce food losses along production and supply chains, including post-harvest losses.

Who is responsible for such a major catastrophe? While households are accountable for the majority (53%) of food waste, food processing plays its part.  According to the European Union, 19% of food waste in the EU is due to food processing. Much of the problem lies in the traditional method of food quality assurance, entirely based on throwaway food samples.

Today food quality assurance is carried out through a thermometric metal probe. According to the traditional method, the packaging of the food sample is breached, then a metal probe is inserted into the thickest part of the food and stays there until the reading stabilizes. Successively, the metal probe must be cleaned and disinfected, as it is to be reused on the next food sample. At the end of this measurement process, the food sample is no longer fit for consumption and is thrown away together with the packaging which has to be recycled or sent to landfill.

As is evident, not only does this method feed wastage, but also raises many important health concerns. Indeed, the traditional procedure is prone to errors: by positioning the probe incorrectly, there is a risk of missing hot or cold spots. In other words, depending on the way the procedure is being carried out, the metal probe might be measuring the surface or core temperature alone, rather than the temperature of the whole food sample. Also, the metal probe being reused is not a fully traceable practice, as it increases the probability of human errors in data recording. 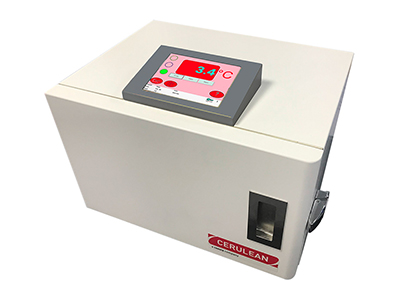 As part of this collective effort against environmental pollution, Cerulean is taking action by launching CelsiusChecker, a revolutionary, industry-ready solution for food quality assurance of chilled and frozen products that generates literally no waste. CelsiusChecker is a non-destructive solution for food quality assurance. Rather than metal temperature probes, CelsiusChecker makes use of a non-contact microwave thermometer that measures the equilibrium temperature of the food sample without breaching the packaging. With this method, the product, including packaging, is placed inside the CelsiusChecker's sealed chamber, where an internal antenna tracks the microwave radiation emitted from the product. The rationale is that all objects are made of vibrating molecules that emit microwave radiation, which we normally refer to as their temperature.

This process has significant advantages over the traditional method. First, it is more accurate, as it leaves no room for human mistakes, both in regards to the positioning of the probe and when it comes to cleaning and disinfecting the probe. Secondly, it saves the environment, as it produces no waste, neither in terms of plastic pollution nor in terms of wasted food. Finally, it saves money, since the food sample is left undamaged by the procedure and, therefore, it can be sold.

CelsiusChecker is available in 20, 40 or 90-litre volume varieties, the only difference between the models being the capacity of the chamber.