Picking the right food thermometer for chilled and frozen food: A case study

When it comes to chilled and frozen food, picking the right food thermometer is essential. According to the FDA, chilled and frozen food are among the Time/Temperature Control for Safety Foods. Long story short, they require constant supervision to keep them from entering the so-called “danger zone” between 4° and 60°C, that is, the temperature range where microorganism growth and toxin formation tend to occur. In this context, timing is really the name of the game. In the span of as little as twenty minutes, bacteria can double in number and become harmful to the organism.

And here it gets trickier. As the relationship of cell death to temperature is logarithmic, the slightest measurement error may make the difference between a delicious cheesecake and food poisoning. The problem is, even with industrial-grade thermometric metal probes the process is not as reliable as we are used to thinking. To conduct the test, the probe must be inserted into a portion of the food sample. Because of this, the reading may refer to the core temperature of the portion where the probe was inserted rather than to the equilibrium temperature of the sample. Consequently, several measurements are needed to make sure that the reading is sound.

And then there’s the environmental impact. With thermometric probes, the food sample is no longer fit for consumption after testing, therefore it must be disposed of - which of course falls on the manufacturer. This is no small thing - both economically and ethically. According to the British charity “Waste and Resources Action Programme” (WRAP), the ready meals and chilled products' sector accounts for 12% of total waste in the food and beverage industry supply chain. In the European Union alone, 19% of food waste is due to food processing. To make matters worse, the waste of food samples is inherently linked to packaging waste and, consequently, to plastic waste. Indeed, the sample’s packaging must be opened for the testing to occur. As reported by Friends of the Earth and Zero Waste Europe, 40 percent of the Union’s demand for plastic is packaging. 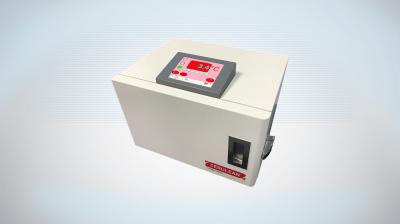 Fortunately, though, there is an alternative to thermometric probes. It’s called CelsiusChecker and it’s the world’s first non-contact microwave thermometer to be deployed in industrial environments. In short, it consists of a sealed chamber working as a thermo-scanning Faraday cage. To test the sample, the operator must place it inside the chamber, which shields it from all electromagnetic fields. If on the one hand thermometric probes measure the temperature thanks to thermal conduction, CelsiusChecker detects the thermal electromagnetic radiation of the object inside the chamber. All in all, it is a non-invasive, microwave thermo-scanner through and through. Most importantly, it is the only temperature measuring device that produces no food waste and no packaging waste, at all. Indeed, as the process is non-contact, the sample can be inserted inside the chamber without spoiling it or opening the packaging. Available in 20, 40, or 90 liter varieties, CelsiusChecker allows the food manufacturer to sell the sample and cut greenhouse gas emissions and disposal costs.

CelsiusChecker vs probes: a success story

This story involves a well-known large frozen food processor based in North America. Before getting in touch with CelsiusChecker, the company was already conscious of the economic toll of waste involved in their QA procedures. Following an internal audit, the amount produced per shift was estimated to be in the range of 3.5 tons, roughly accounting to 2,117 tons per year, equivalent to 171 London busses. Business wise, it meant $2M per year was literally thrown in the trash. Afterwards, the company managed to squeeze down costs to by 37.6%, or a little more than $718k per year. Yet it was not enough. Having heard of CelsiusChecker’s potential, this frozen food processor was open to try the solution.

But first, the company needed to establish whether CelsiusChecker worked as advertized. In other words, how did CelsiusChecker’s performance compare to traditional thermometric probes? To find out, the company set up an engineering team trained in Six Sigma, which designed and conducted a statistical study to verify the claims. As expected, the study proved CelsiusChecker’s performance to be on par with its competitors’. Once that was clear, the QA team proceeded to calculate the economic advantage of CelsiusChecker. As with all new technologies, it was uncertain whether the reduced costs would have offset the cost of changing a tried-and-tested procedure. So the QA team set an ambitious target of -30% waste produced per year, equating to 649 tons and $500k.

The test was a triumph. With CelsiusChecker, the company was able to eliminate the need for disposing of 1.6 tons of food waste daily, saving $1,450 per day, or $450,000 in a year. This translated into a reduction of food waste of 1209 tons of food per year, that is, almost double the initial target.

In conclusion, traditional thermometric probes feed food waste and plastic pollution, all while being prone to human errors. CelsiusChecker is the world’s first non-contact microwave thermometer for industrial scenarios. Being non-contact, it avoids food and packaging waste all together. Not only that. As shown in the success story above, it also is very effective business-wise.

Are you a food manufacturer looking for ways to cut your costs and reduce carbon emissions? Get in touch!